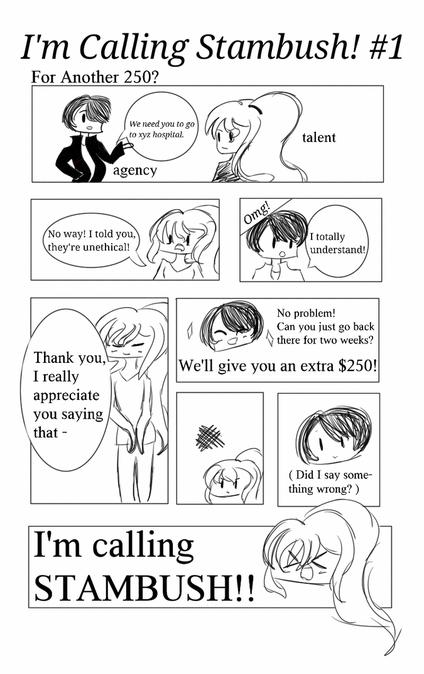 ​Introducing Our “I’m Calling Stambush” Campaign
To bring life to the stories I have heard while interviewing and/or talking to other agency personnel, I am going to try to tell these stories with animation. I cannot draw, but I’ve recently discovered that my 12 year old daughter, Sassy, can.  And so, I’ve asked her to match her drawings with the dialog I provide her.  All these stories are true to the best of my recollection, and some of you will recognize the story because you told it to me.  Others will recognize the story because I’ve written about it before.   I would like your feedback as well as any suggestions and/or criticisms.  For now, Sassy owes me 6 drawings (she broke her phone could only pay part of the cost), but after the first six, I will have to start paying her.   So, here is our first version, titled “For Another $250?”  It is also available on our “Resources” page of Stambush.com I’m Calling Stambush!

So many things make Stambush an oasis of integrity, and our Equal Pay Policy is one of them.  But before I talk about Equal Pay, I want to make sure everybody knows that we highly value competent experience.  After all, unlike the rest of the staffing agency herd, no one can even join  Stambush unless they have a minimum of one year of direct patient care experience.  Everybody with less than two years’ experience starts off on probation with less money than the non-probation Talent. Also, people who score somewhat low on our competency test, yet still pass, start off on probation with less money.  So, we don’t have a 100% Equal Pay Policy for all people all of the time; but even the folks on probation are treated equally.  Of course, people who fail our competency test don’t get hired at all, but that is a different article.

And so without further ado, here are some reasons why we are so different from the staffing agency crowd regarding pay equality.

• It Eliminates Corruption:  Pay equality prevents us from booking a cheaper person over a more experienced person.  In the agencies that pay people based on years of experience, the agency is most motivated to book their new grads and least paid people first.  This perverted system is magnified when the staffing person gets a commission based on how much profit they produce.  At Stambush, your office professionals (Fred, Tricia, and Grace) get no commission.  Having worked in the Salary Plus Commission world before Stambush, I saw a lot of corruption by sales people.
• It Promotes Transparency:  Pay equality makes what we pay transparent to everybody in the company.  Unlike other agencies that pay people differently and then, in the Policy & Procedures, tell people they are forbidden to talk about what they make, Stambush Talent have no worries about discussing their pay with fellow  Stambush Talent.  This transparency should help everyone rest assured they are not getting tricked or cheated, and it also takes the stress out of  negotiation.
• It Promotes Fairness:  To me, it is unfair (“unfair” is the kindest word I can think of) for a staffing agency to motivate itself to book its cheapest people first. Instead, a staffing agency should be motivated to book the best person for the job.  And that is what we do.  We may be a lone voice in the wilderness of the staffing world, but if we are not going to be ethical and fair with people, what kind of world are we helping create?
• We Don’t Want to be Your Adversary:  The whole unequal pay scheme breeds (imho) an adversarial relationship between the agency and its Talent, as well as Talent against Talent.   Since our inception, every raise we have ever given has been across the board, and based on our philosophy that if the market goes up, we should give our teammates their cut.  And if we don’t, we explain what is going on.  We work this way because we see you more of a teammate than an opponent competing for company dollars.
•  For instance, as someone who has interviewed well over 1,000 (probably over 2,000) professionals, I can tell you

we were paying.  How could that happen?  These people trusted their agency to practice good faith and fair

dealing.  Consequently, as the agency raised its prices and its rates over the years, only the new hires and

complainers got the increased rates, and the silent majority lost out big time.  I guess the agency thinks it won, but

that agency isn’t doing so well anymore.  I wonder why?

So please help spread the word about our Equal Pay Policy and the reasoning behind it.  I actually like to think of our reasoning this way:  Corruption bad.  Transparency, fairness, and teamwork good.

​​
Trending in Our Favor, Finally?
My statement (Straight Shooter 12-31-15) about last year being better than the year before is not just true for us, but also seems to be true for the entire country.    According to an article I read last week modern healthcare, 2015 saw the addition of 474,700 new healthcare-related jobs.  Granted, while this includes support personnel, 2015 was bigger than 2013 and 2014 combined.  Here are the numbers from the article:

Breakdown of December of 2015:

So yes, the trend seems consistent with our need for more PT, OT, and SLP professionals.  And while the PTA and COTA demand is not as strong yet, I expect those two professions to catch up.  As we all know, Assistants play a vital role in health care.